Home Culture Unlike Allie Long And Megan Rapinoe, These U.S. Athletes Went Above And... 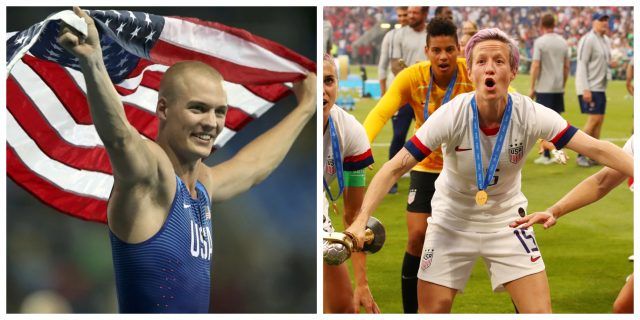 First on the list is their teammate Kelley O’Hara, who was knocked out of the match with concussion-like symptoms, was praised, however, for running in and picking the flag up soon after it had been dropped.

O’Hara’s first professional team, the WPS’s FC Gold Pride based out of Santa Clara, CA, won the league championship and then folded. Picked up by the Boston Breakers, O’Hara scored ten goals in two seasons playing as an outside mid. In January 2012, the Georgia native announced that she’d be going home to play for the Atlanta Beat—but then the entire league folded. When the NWSL began, O’Hara spent four seasons with New Jersey’s Sky Blue before landing with Utah Royals FC. While initially nervous about the move, and sad to leave the team of girls she loved, she has enjoyed playing for Utah. “My favorite part is how well the club is run—I feel like a professional athlete,” says O’Hara. “I guess I never realize that I craved that—it’s awesome. I’m so, so thankful—it takes your game to another level.”

On April 25, 1976, Chicago Cubs outfielder Rick Monday saw a couple of protesters walk out onto the field, where they attempted to set an American flag on fire. Without hesitation he ran toward them, scooping up the flag and getting it to safety before they were able to light it.

On August 21, 2016, U.S. Army Reserve 2nd Lieutenant Sam Kendricks had already started running in his attempt during the qualifying rounds of the men’s pole vault at the Olympics in Rio de Janeiro when he heard the opening strains of the “Star-Spangled Banner.”

Kendricks slowed to a stop, dropped his pole, and snapped to attention despite the anthem being played for an entirely different event.

Olympian and legal immigrant Bernard Lagat qualified for his fifth consecutive Olympic games on July 9, 2016. The 41-year-old had just completed a 5000m run, besting a field of men in their 20’s and 30’s, and he took a victory lap.

But halfway around the track, the small American flag Lagat was carrying got away from him. He stopped immediately, snatching the flag from the ground and kissing it. He then grabbed a larger flag and went on with his lap.

Jamaican track and field legend Usain Bolt once famously stopped a 2012 live interview in order to stand in silence while the U.S. national anthem was played for another event.


So we decided not to label the whole U.S. women soccer team because It wasn’t the whole women’s soccer team that was involved with any type of disrespect. Only two, or three of them, but they were the ones in the news, and tarnished the rest of the team! I have only seen one picture of Kelley O’Hara in the mainstream media.