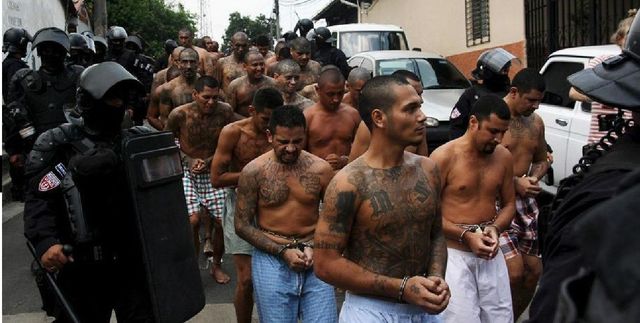 How does anyone know who is fleeing Central America for political reasons and who is infiltrating the Caravan? Well, we found out that there are MS-13 members amongst the refugees.

So far, at least 25 gang members affiliated with the MS-13 gang were deported from Mexico. They were revealed to be concealed among the 1,600 Central American migrants who are now just across the U.S. border in Mexico.

The location in Mexico is across from Eagle Pass, Texas.

Officials from the Instituto Nacional de Migración identified 10 gang members from Mara Salvatrucha which is also known as MS-13.

A total of 70 Central American migrants have been deported to their home countries along with the gang members.

About 1,500 migrants have been granted humanitarian visas to move freely within Mexico.

Officials said on Saturday that the shelter, which holds hundreds of Central American migrants, would be closed by Wednesday.

Coahuila State Public Safety Secretary Jose Luis Pliego told press that authorities have taken about 400 migrants to neighboring states such as Nuevo Leon and Tamaulipas to be integrated into the workforce.

The rest of the migrants may seek other options to try to cross into the United States.

The migrants have wanted to appear at the U.S. border to apply for asylum. Only about a dozen per day have been allowed to go through a port of entry.

The dangerous MS-13 gang originated in Los Angeles’ prisons before infiltrating the rest of the U.S. mainly consists of El Salvadorans.

President Trump visited the Rio Grande Valley Sector in January. Trump highlighted what he called a crisis of crime and drugs along the southern border.

Democrats are adamantly opposed to a border wall or barrier even though many supported the idea during previous administrations.