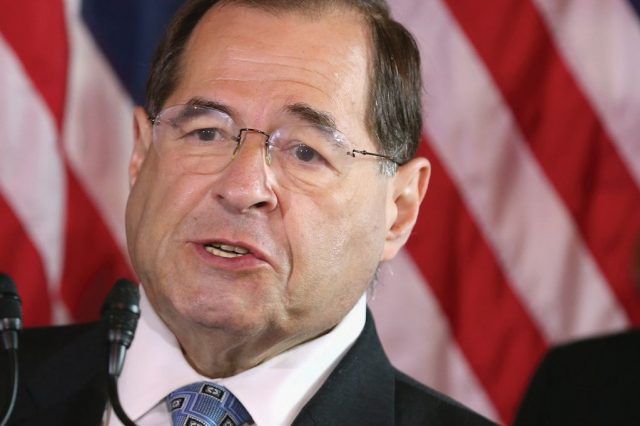 Rep. Jerrold Nadler (D-NY) is slated to be the new Chairman of the House Judiciary Committee after the Democrats won the US House, and he will immediately use his power to profile and intimidate white people.

“He calls himself a nationalist. He falsely claims that “foreigners” are the primary sources of domestic terror. He famously claimed that there were “some very fine people on both sides” of the riot in Charlottesville — where a neo-Nazi demonstration ended in the death of one counter-protestor and two officers of the Virginia state police,” Nadler said.

Of course, it is well-known that the political left is faking hate crimes in an organized, coordinated fashion. One database has compiled hundreds of instances of faked hate crimes that have occurred since President Donald Trump’s election in 2016 alone. Meanwhile, ANTIFA declares its support for terrorism and commits acts of violence against patriots in the streets while Democratic Party officials and liberal media commentators egg it on. Of course, Nadler neglected to mention ANTIFA in his biased propaganda letter that makes a complete mockery of justice.

Nadler will also use his position of power to further investigate Brett Kavanaugh, even though he was already confirmed as a Supreme Court Justice and some of the accusers have since admitted they falsified their charges. He will be creating as many witch hunts as possible as Nadler desperately attempts to sabotage the President and prevent him from making America great again.

“The Senate having failed to do its proper constitutionally mandated job of advise and consent, we are going to have to do something to provide a check and balance, to protect the rule of law and to protect the legitimacy of one of our most important institutions,” Nadler said to the New York Times.

Nadler will make sure that white people are profiled and stigmatized due to his divisive investigations. He will not protect the rule of law, but rather the rule of mob, as he abuses his power as the head of the House Judiciary Committee.