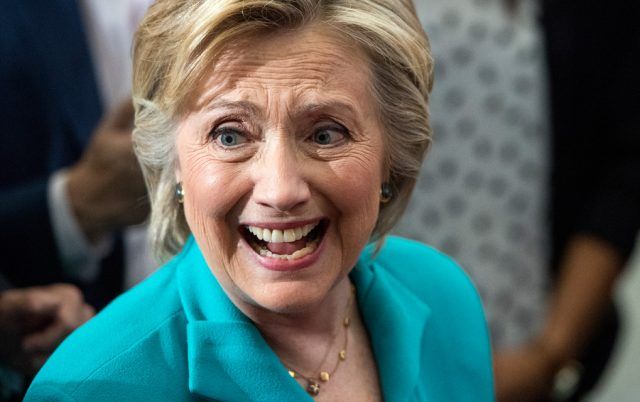 Multi-time presidential bust Hillary Rodham Clinton has put herself in the news whenever possible in recent weeks, as she continues to make herself a political football as she contemplates running for President yet again in 2020.

Recently, Clinton shocked onlookers as she made an incredibly prejudicial comment while being interviewed at a public event by claiming that all people of color looked the same:


Of course, if Trump had made that comment, he would be crucified. But putting aside the obvious double standard for a moment, that racist ‘joke’ from Crooked Hillary is far from an isolated incident. This lady has a long history of extreme racism.

Because of her cozy relationship with the mainstream media, Clinton’s bigoted history was swept under the rug while she was on the campaign trail in 2016. Here are some of her greatest racist hits:


Here is Crooked H in her own words professing that former West Virginia Senator Robert Byrd to be her friend and mentor. Robert Byrd was an avowed racist and leader of the Ku Klux Klan who was celebrated as a hero by Democrats for years despite his history as a vile hatemonger.

Crooked H also admires Planned Parenthood founder Margaret Sanger and received an award in her honor. Sanger’s diabolical plan – aided by politicians such as Hillary Clinton – to push abortion as eugenics has resulted in the slaughter of millions of black babies in the womb. This is a holocaust that Adolf Hitler could have only dreamed of.


Crooked H also has a history of making condescending remarks toward people of color. After being questioned about how she intends to address white on black violence. Hillary became unglued and made a very rude remark, talking down to an African-American gentleman, claiming that due to his “attitude,” she would only talk and address questions from white people.


In 1996, Crooked H made a speech about targeting black youth for gang activity where she used the stunningly racist term “super predator” to describe them. The speech was referring specifically to the 1994 Violent Crime Control and Law Enforcement Act, which Bill Clinton had signed into law. This legislation has caused a disproportionate number of black Americans to be arrested and incarcerated, feeding the growth of the prison-industrial complex.


It is not just Crooked H who makes racially-insensitive statements, but her close associates in the Democratic Party as well. While sharing a stage with New York City Mayor Bill de Blasio, she poked fun at how long it took him to endorse her. De Blasio said response, “Sorry, Hillary, I was running on C.P. time.” For those of you who do not know, “C.P. time” is short for “colored people time,” which is another racial stereotype implying that Americans of color are habitually tardy and unreliable.


On the New York City radio show “The Breakfast Club,” Crooked H was asked if there was something she always carried with her. Hillary replied, “Hot Sauce.” This reply was a racial stereotype as she was desperately trying to pander to black Americans. Sheriff David Clarke expressed his disgust with what she said.


Behind closed doors, Crooked H and her perverted predatory husband are far worse.

The Guardian reported another incident where Hillary called Bill’s campaign manager, Paul Fray, a “fucking Jew bastard.” She denies it, but three witnesses have come forward and publicly acknowledged that she indeed said that awful slur. Her husband even implied that the first African-American President was only fit to carry his bags. It was Hillary campaign operatives that initially launched the controversy over former President Obama’s birth certificate as well.

Feel free to show this storied history of Hillary Clinton’s racism to any sanctimonious liberals who denigrate Donald Trump for his non-existent bigotry!