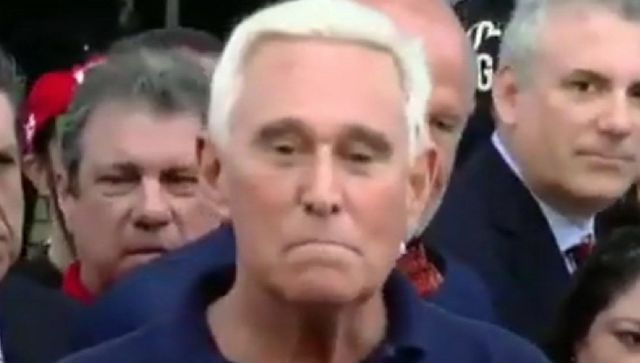 On Friday Roger Stone was arrested in the wee hours of the morning. Stone was awakened in his Florida home by a slew of FBI SWAT team. CNN just happened to be there to film the arrest.

The SWAT team, with helmets on and with guns drawn, banged on Stone’s door and demanded that he come outside. They barraged into Stone’s home in Fort Lauderdale. Stone was asleep but woke up and went to the door in his pajamas.

CNN producer @davidgshortell describes the moment Roger Stone was taken into custody by the FBI. The longtime Donald Trump associate has been indicted by a grand jury on charges brought by special counsel Robert Mueller https://t.co/wUJEIkKDTw pic.twitter.com/AJ3JWWSHs3

President Trump had this to say:

Greatest Witch Hunt in the History of our Country! NO COLLUSION! Border Coyotes, Drug Dealers and Human Traffickers are treated better. Who alerted CNN to be there?

Stone, aged 66, was taken into custody after being indicted by a federal grand jury yesterday as part of Robert Mueller’s investigation into Russian meddling and potential collusion with Trump campaign associates during the 2016 presidential election.

During a press conference Stone said that his wife and dogs were frightened by the flashing lights and manner in which he was taken into custody.

For months, Stone has warned that he could be indicted. He has repeatedly denied the accusation that he actually had advance knowledge of WikiLeaks releasing hacked emails of Democrats during the 2016 campaign.

Stone spoke with reporters as he left the court. Stone said, “I will plead not guilty to these charges. I will defeat them in court. This is a politically-motivated investigation.”

Stone adamantly proclaimed that he will not dish dirt on the president to prosecutors.

Stone said, “There is no circumstance whatsoever under which I will bear false witness against the president, nor will I make up lies to ease the pressure on myself.”

The sealed indictment was unsealed on Friday. It does not charge Stone with conspiring with WikiLeaks or with the Russian officers Mueller says hacked them.

WikiLeaks is the anti-secrecy website that published emails about the Clinton campaign in 2016.  or with the Russian officers Mueller says hacked them. with guns banging on Stone’s door and demanding that he come outside.

The indictment accuses Stone of lying about his interactions related to the WikiLeaks’ release during probes by Congress and Mueller’s team.

The indictment does raise questions about the hacked emails.

The indictment states that during the summer of 2016, Stone spoke to senior Trump campaign officials about WikiLeaks and information it might have had that would be damaging to Democrat Hillary Clinton’s campaign.

The indictment says that Stone was contacted by senior Trump campaign officials to inquire about future releases. It also says Stone continued to communicate with members of the Trump campaign about WikiLeaks.

On Friday a lawyer for Trump, Jay Sekulow, said, “The indictment today does not allege Russian collusion by Roger Stone or anyone else. Rather, the indictment focuses on alleged false statements Mr. Stone made to Congress.”

The indictment, which is 24 pages, alleges that Stone worked to obstruct the House Intelligence Committee’s investigation into Russian interference in the 2016 election.

Mueller’s investigation has gone on for more than a year and half but no collusion has be uncovered.