Home Media Ted Koppel: Trump’s ‘Not Mistaken’ That Liberal Media Are ‘Out to Get... 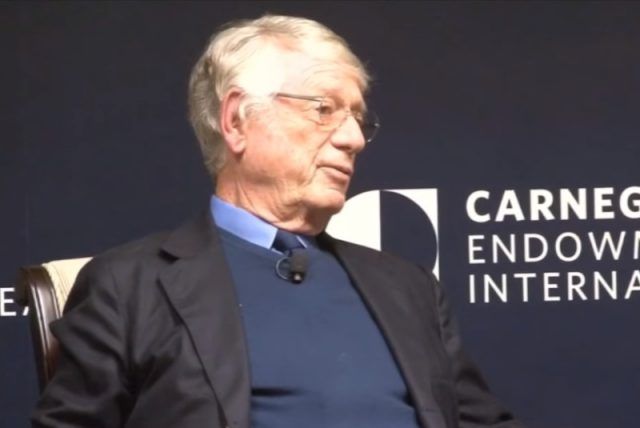 Former ABC News Anchorman Ted Koppel  during a discussion with Marvin Kalb at the Carnegie Endowment for International Peace indicated that the liberal media is out to get President Trump and they are brazen about it.

Koppel says that it is obvious that reporters have dropped any concerns for objectivity in their quest to oust President Trump from the White House in one way or another.

Koppel points out that the liberal media is headlining commentaries (opinions) as news over actual objective news.

I turned to my wife and I said the Times is absolutely committed to making sure that this guy does not get elected. So his perception that the establishment press is out to get him doesn’t mean that great journalism is not being done. It is. But the notion that most of us look upon Donald Trump as being an absolute fiasco, he’s not mistaken in that perception and he’s not mistaken when so many of the liberal media, for example, described themselves as belonging to the Resistance.

What does that mean? That’s not said by people who consider themselves reporters, objective reporters of facts. That’s the kind of language that’s used by people who genuinely believe, and I rather suspect with some justification, that Donald Trump is bad for the United States and they’re betting that the sooner he’s out of office the better they will like it. Whether that happens by virtue of indictment, impeachment or election, we’ll see. But I disagree with you, Marvin. We are not the the reservoir of objectivity that I think we were.

Video: Burglar Trying To Break Into A Car Parked On The Driveway, The Homeowner Comes Out And Serves Him Instant Justice – People Call...