Home Culture “The Constitution Of The United States Is Being Violated!” – NYPD Arrests... 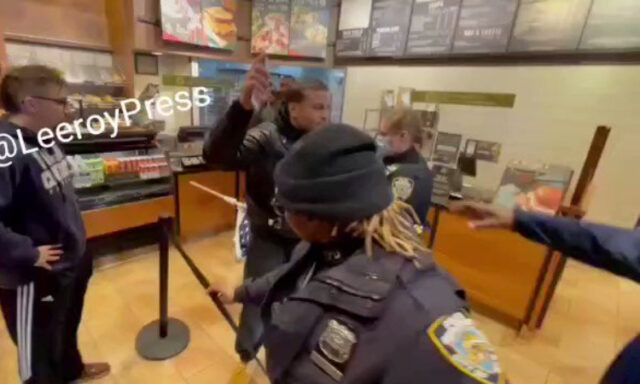 Last week New York Gov. Kathy Hochul announced a statewide mask mandate for all indoor public places unless the businesses or venues already have a vaccine requirement in place.

The mandate went into effect Monday through Jan. 15, 2022, at which point the state reassured its effectiveness based on Covid-related public health conditions.

Noncompliant businesses could be subject to both civil and criminal penalties with a maximum fine of $1,000 per violation. Local health departments will enforce the mandate.

New York City, for instance, issued an advisory strongly recommending that everyone wear masks indoors in public places at all times regardless of vaccination status.

This just adds to other already strict vaccination mandates where un-vaxed people can’t do much in this liberal state!

Yesterday a veteran was arrested at a branch of Panera Bread in Brooklyn for not showing proof of vaccination.

The way the arrest was conducted doesn’t remind us that we are living in a free country!

The man in the clip, who is reportedly an army veteran, expresses concern that as police are arresting him, they repeatedly allow the U.S. flag to drop to the ground.

“The flag does not touch the ground!” asserts the veteran.

“The Constitution of the United States is being violated – I cannot eat!” he adds.

The man repeatedly tells cops he is non-violent and has no weapons as he is marched out of the store.

Other customers who have already paid for food are also ordered to leave the store.

Man was arrested in Brooklyn, NY after trying to order food at Panera Bread without a vaccine pass

The same man was reportedly arrested twice last week for trying to order food without showing a vaccine passport.