Home Opinion The House Democrats Allegedly Snuck In The Federalization Of Guns Into The... 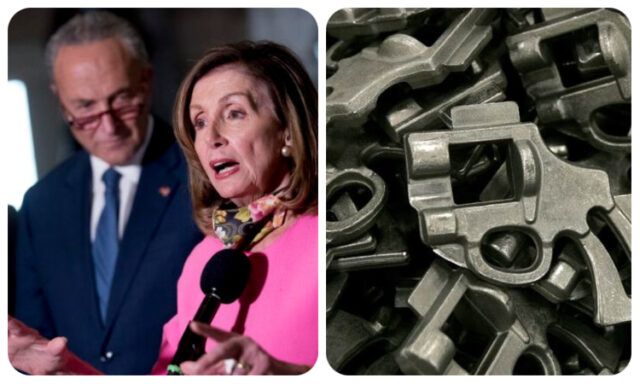 Due to continued efforts by Democrats to include gun control measures in the legislation, the bill was last passed into law in 2013, and has faced steep opposition from pro-Second Amendment Republicans since then.

Currently, almost all firearm sales require a background check through the National Instant Criminal Background Check System (NICS). Purchasers who are tagged as having a criminal background barring them from possessing a firearm are tagged in the system and are not allowed to carry out the purchase.

However, VAWA takes this system much further.

Under its provisions, the attorney general is required “to issue a notice to State, local, or Tribal law enforcement and prosecutors if an individual has attempted to purchase a firearm and been denied pursuant to the national instant criminal background check system.”

In other words, an attempt to buy a firearm while legally barred from owning one can be met with criminal investigation.

Recently the Gun Owners of America (GOA) sent out an alert chronicling the serious issues they found in the bill already passed by the House and Senate.

So far, Gun Owners of America has been successful at defeating the gun grabbers at every turn. But just recently, the anti-gun politicians have pulled perhaps their dirtiest trick yet.

Because your elected officials are afraid of being on the record, leadership protects them by stuffing things they don’t think will pass on its own merits into what is known as the annual omnibus bill, or omni for short.

One would think because negotiations have been ongoing for years, politicians would wise-up to the fact no one wants gun control. Rather than listening to you, they would rather stuff VAWA into this upcoming omni and claim they had to vote for it to fund everything our government does.

Thanks to pro-gun fighters like you, we were able to pressure lawmakers to remove anti-gun provisions such as the boyfriend loophole and red flag laws for military service members. However, this bill still contains some nasty anti-gun provisions that we will never compromise over.

In a separate e-blast sent out via email on March 10th, the GOA noted the following:

Yesterday under the cover of darkness, Congressional Democrats released a 2,741 page government funding bill at 1:30 AM.

GOA rushed to analyze the bill, found the gun control buried on pages 2207-2213, and alerted our grassroots activists to take action.

Despite our best efforts, the gun control passed 260-171 with the support of 39 Republicans later that same day at 10PM.

Government funding will likely be extended until March 15th, so we have five days maximum to defeat this gun control in the Senate.

A video where everything s explained: