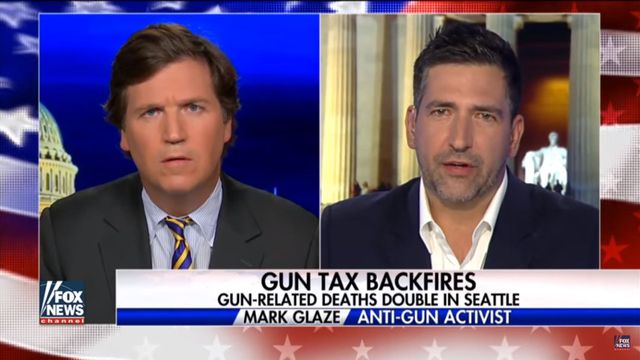 When the City of Seattle passed a tax on all sales of guns and ammunition, the measure was hailed as a way to defray the rising costs of gun violence.

But since the tax took effect, those costs have only risen as gun violence in the city has surged. And the tax has apparently brought in much less than city leaders projected it would.

Seattle City Councilman Tim Burgess introduced the tax in 2015. It puts a $25 tax on every firearm sold in the city and up to 5 cents per round of ammunition. The measure easily passed and took effect January 1, 2016. Comparing the first five months of 2017 with the same period before the gun tax went into effect, reports of shots fired are up 13 percent, the number of people injured in shootings climbed 37 percent and gun deaths doubled, according to crime statistics from the Seattle Police Department.

Glaze said the purpose of the law was to help fund studies of gun control and not to end gun violence like Carlson allegedly claimed. However, Carlson said that isn’t what he claims.

Carlson asked, “The point was to make Seattle a safer town but the murder rate doubled, so wasn’t this a demonstrable failure?”

“Well in point of fact, I think the reason they passed this gun tax was to try and raise some money so they could study gun violence, which I think is a good thing to do,” Glaze said. “I don’t think a $25 gun tax is the reason murders are up there. The reason murders are up there is because there are a couple of rival gangs killing each other with guns. So I hope the Universtiy better use the research money for good purpose.”

Glaze responded by accusing the “gun lobby” of preventing the federal government from allocating funds to study gun violence, so Seattle created their tax in order to do it themselves. But Carlson wanted Glaze to address the real facts of the matter.

“Again, the whole point of all of this…is to reduce gun violence — and it doubled [in Seattle],” Carlson said. “So it’s hard to take you or people like you seriously if you don’t let the data drive your conclusions. And the data here are really clear, crystal clear. This didn’t work, so why would you still support it?”

Glaze again reiterated his claim that no person in Seattle thought the gun tax would drive down gun violence, but Carlson quickly called out him out.

“That’s not true,” the Fox host interrupted. “They didn’t say ‘we’re gonna end all gun violence,’ but they said it would make it a safer city — and the city got more dangerous.”

Glaze then tried to move the conversation along to discuss control measures that he alleged the public “wants.” He said that instead of a gun tax, Seattle should implement a ban on “semi-automatic” rifles with “high capacity” magazines, alleging that gang members “most often” use them to commit acts of gun violence while drawing a connection to the weapon used to nearly assassinate House Majority Whip Steve Scalise (R-La.) earlier this month.

But once again, Carlson was quick to throw a time-out on the field.

“But your numbers are just wrong,” Carlson replied. “Actually, a relatively small percentage of murders in this country are committed with rifles of any kind. They’re almost all committed with handguns.”

“So I know these guns may look scary, and they send you guys into a frenzy because they’re terrified-looking, but they don’t actually drive the problems. So again, you’re wrong,” he explained.

Given the number of firearms in America — which is believable to be several hundred million — Carlson said the “truth” of the matter is the only way gun control advocates will get what they want is through gun confiscation.

Glaze suggested the federal government buyback Americans’ guns in order to dramatically reduce the number of firearms in the country similar to what Australia did. But Carlson noted that Australia’s gun “buyback” wasn’t voluntary and was actually gun confiscation.

“That’s not true, that’s not true,” Carlson said. “They didn’t buy them back. They confiscated them by force. You had no option. It wasn’t voluntary. If you tried that in this country, you would have a civil war in about 10 minutes.”

“Is that the plan? To take people’s guns by force?” Carlson questioned.

Glaze responded by alleging two-third of American gun owners would willingly give up their firearms in a government buyback.