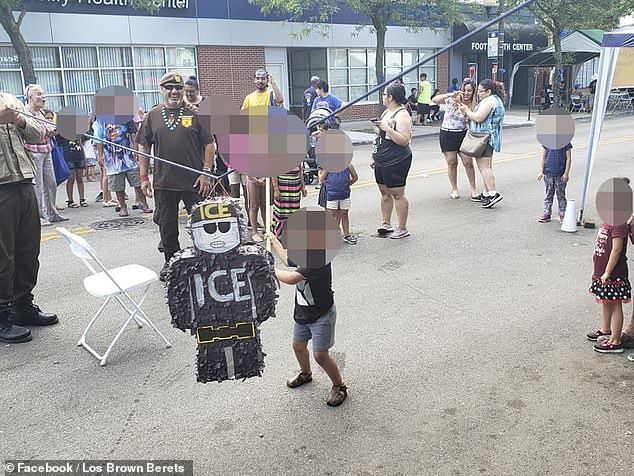 There are many liberals around that are protesting the ongoing ICE raids.

Some of them burn the American flag, some of them dump gallons of fake blood on ICE buildings and some of them are teaching their children to hate ICE agents.

In this case they teach their children to punch Piñata that looks like ICE agent.

A city-sponsored community block party in Chicago sparked controversy when children were seen whacking a piñata shaped like an ICE officer.

The provocative image was seen at East Side Community Day on July 13, organized by the Chicago chapter of the Los Brown Berets, a nationwide pro-Chicano nonprofit.

ne the people behind the group that brought the piñata said they were banking on making a statement during East Side Community Day in Chicago.

“Some parents were holding their kids to hit the piñata,” said Anthony Martinez of Los Brown Berets.

Pictures posted on social media show several other children in line waiting to take a swing at the political piñata.  Many Facebook commenters applauded the idea while others were in disagreement, calling the activity ignorant, disrespectful and teaching the young to hate.

“It was not meant in a negative way at all towards law enforcement,” said Martinez, who leads the Chicago chapter of Los Brown Berets, a nationwide activist group aimed at overcoming inequalities against Chicanos.

Martinez said his organization bought a Batman piñata and transformed it into a Immigration and Customs Enforcement officer.

“Taking children from their parents, separating them,” Martinez added.

At the same event, children were offered a chance to throw balls at a painted image of President Trump.

“And it affected the event, and that’s OK,” said Marvin Covington of the East Side Chamber of Commerce.

“It wasn’t told to me, ‘Hey, there’s going to be an ICE piñata coming, but it was there,” he said.

Sometimes it’s like watching a horror movie. But, sadly, it’s real. We can only pray daily for our country and for those that serve it.