Home Opinion Video: Joe Experienced The Trifecta From Hell In East Jerusalem – Gets... 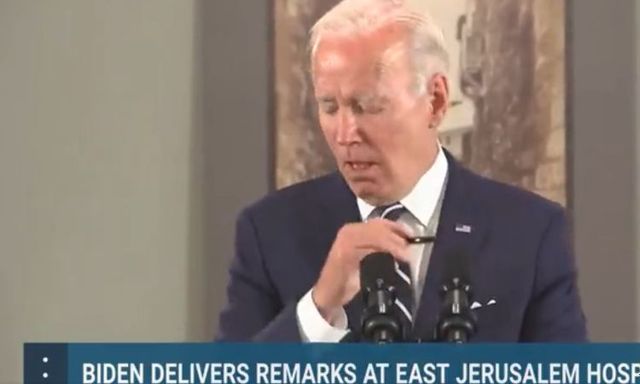 Before crossing into East Jerusalem, Biden removed the Israeli flags from his motorcade — “a move that may be seen as undermining Israeli sovereignty”:

Biden's entourage removed the Israeli flag from his car during his visit to east Jerusalem — A move that may be seen as undermining Israeli sovereignty.

And he pledged $100 million of aid to a Palestinian hospital network while there:

But this led to gaffe No. 2 as no Israeli officials were allowed to attend the ceremony:

And “Israelis are furious”:

Biden took a dig at our two biggest allies — the UK and Israel — in one quote after comparing the Irish experience with Great Britain to what’s going on with the Palestinians and Israel.

BIDEN in East Jerusalem: "…the background of my family is Irish American and we have a long history not fundamentally unlike the Palestinian people, with Great Britain and their attitude toward Irish Catholics over the years for 400 years." pic.twitter.com/stj17lgSvv

Oh, and he’s still shaking hands after he urged people to avoid doing that:

That wasn’t the end of Biden’s troubles he also experienced the trifecta from hell in East Jerusalem.

He appeared exhausted, barely able to push his words out, and he was coughing, a lot.

Did he catch Covid?

It appears that he is the only person on earth that didn’t get Covid!

Joe experienced the trifecta from hell in East Jerusalem.

Joe claims he was coughing because he “swallowed wrong.”

Here’s what people online are saying:

“The ‘ol down the wrong tube trick…this guys got COVID”

“He doesn’t sound good. He’s talking so slow, like he has no energy left.”

“Did they literally just wake him up from a nap to deliver this low energy speech?”

“I get it that people choke, we’re all human, but this sounds worse than that, he sounds so listless and tired. Could he have Covid?”

“Joe is mentally and physically sick”

“Dear god, someone tell this man we don’t need a blow by blow about what’s happening inside his esophagus. Gross”

Shortly after that, he lost himself while leaving the stage again!