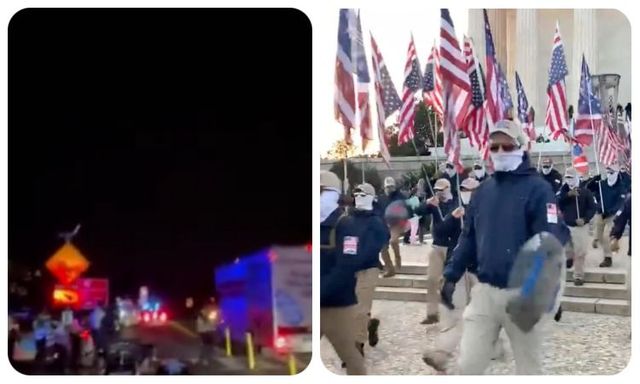 Raws Alerts, “a fast and accurate nonprofit news outlet” with 31,000 followers, is reporting that a group of 150 to 200 people calling themselves the Patriot Front are currently marching on the National Mall on their way to the US Capitol.

🚨#BREAKING : A group of right wingers called the Patriot Front are currently marching to the U.S Capital

Right now a group of 150-200 called “Patriot Front” know as a right wing is currently marching on the national mall in Washington, DC. pic.twitter.com/lcnOOwHTtP

A group of alleged white supremacists stormed through downtown Washington, D.C. on Saturday evening, bearing American flags and mildly menacing plastic shields while marching to the beat of a snare drum down the steps of the Lincoln Memorial. But after chanting aggressively about their plans to “reclaim America,” their intended show of force stalled spectacularly when they lost their ride.

While the group had marched through the city with threatening chants about their plan to “reclaim America,” by the end of the night it was not even clear how they intended to reclaim their U-Haul.

The rally by more than 100 members of the “Patriot Front” group, held just blocks from the White House, sparked fear among many bystanders and immediately attracted the attention of law enforcement, who shadowed the group to forestall any conflict.

As Patriot Front’s leader Thomas Rousseau spoke beside the Capitol reflecting pool, bystanders booed. Asked about the reason for the march, Rousseau said, “Our demonstrations are an exhibition of our unified capability to organize, to show our strength—not as brawlers or public nuisances, but as men capable of illustrating a message and seeking an America that more closely resembles the interests of its true people.”

At the end of the night, the march ended in a logistical anti-climax.

Members of the group had waited in a one-way roundabout to depart in one of the U-Hauls they had used to transport themselves for the rally. But the large rented moving van could not fit them all, so many of them were forced to wait in 45-degree darkness as the bulky orange vehicle made multiple trips over the course of nearly three hours.

However more videos surfaced and people accused the alleged hate group of being full of undercover federal agents:

Who is Patriot front? It certainly is not Maga! pic.twitter.com/NLHPvSnOFU

Is this the group called “patriots front“ marching in DC today? pic.twitter.com/6NjijXSgtO

This shit looks fake af to me. Another fed fest if you ask me… pic.twitter.com/AqqhzpqTrE

Watch DC Police direct traffic around a Uhaul so that definitely not Feds the “Patriot Front” can load 30 deep and then totally-not-illegally drive away. Apparently, this happened with multiple U-Hauls.

Nope. DC police would have arrested/beat everyone for this shit, not help them leave. Fed larpers all the way. https://t.co/jh3QhtLYq1

These guys are definitely feds pic.twitter.com/j0LQSeHsZs

The reactions are not good and people seem to notice that these aren’t real protesters:

They just happen to all be wearing masks. Yeah, okay. That’s plausible for this psych profile. Calling BS right off the bat.

Interview these people. I want real names. Verified. If they are who they say the are, they will have no problem with that.

Suffice to say, these aren’t the right-wing rednecks one would expect to see here, no masks, just giving no f*cks. These look like young fit males, 20s-30s, clean cut, wearing ridiculous costumes like this is some kind of open air theater production. Give me a break.

Lincoln Project seems to have grown

Does the FBI get paid overtime for this?

I can’t find a website or any kind of mission statement for them online. It’s just a bunch of news websites calling them white nationalists or whatever. Does anyone have a legit website or interview with one of their leaders? The media has already proven they can’t be trusted.

How bad of a Fed false flag op was the “Reclaim America” nonsense in DC?

So bad that they supplied them with clear Point Blank Warrior Shields that have 2-3 month lead times and must be ordered to an agency’s specifications. 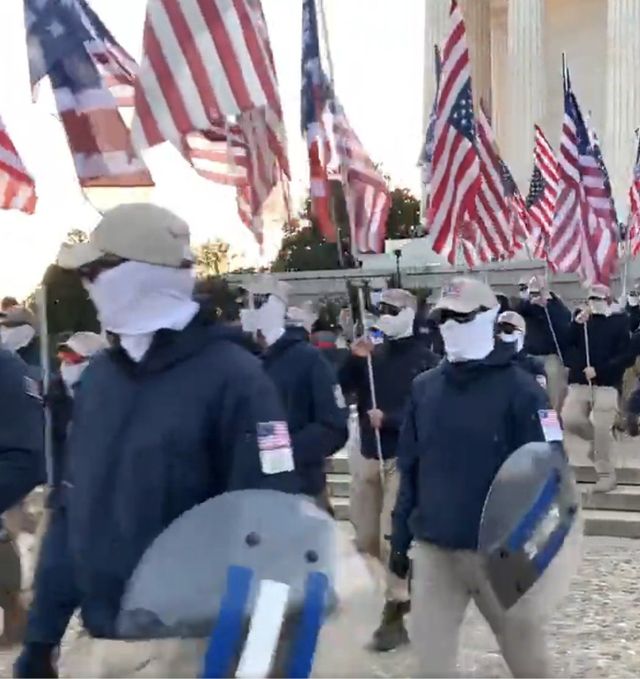 The left is not at all pleased, or they were very well prepared to act as if they were freaking out.

Seemingly the remaining pathetic nazis are being protected by policehttps://t.co/fG1sCAKLhr

— Read Pedagogy of the Oppressed by Paulo Freire (@JoshuaPotash) December 5, 2021