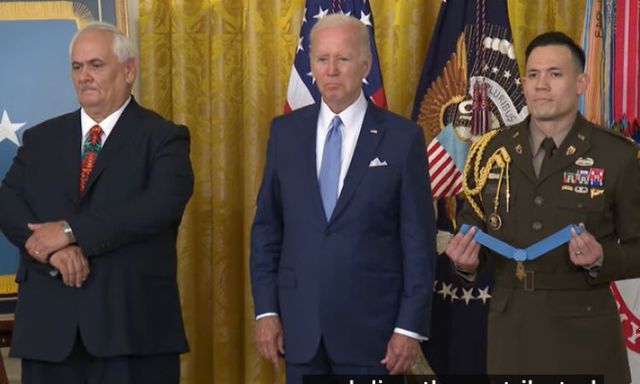 President Biden awarded the Medal of Honor to four Vietnam War veterans Tuesday — including one former soldier who caught an injured compatriot as they fell out of a helicopter.

“We’re upgrading the awards for soldiers who performed acts of incredible heroism during the Vietnam conflict,” Biden said in the White House East Room.

“I mean, it’s just astounding when you hear what each of them have done,” the president added. “They went far above and beyond the call of duty.”

Kaneshiro destroyed three Communist positions in a Vietnamese village by deploying two grenades and rifle fire during a 1966 ambush, according to the official citation for his medal.

These are real American heroes but Biden sure doesn’t act like a real POTUS.

Joe has once again been placed in a hot water after allegations of him putting a medal backward during a ceremony honoring four Vietnam veterans on Tuesday. The video of Joe Biden has gone viral with thousands of viewers online who mocked the president describing him as ‘Sleepy Biden’.

The video, which gained massive engagement, shows the US President handing the Medal of Honor, which is the most prestigious decoration in the US military, to one of the 4 Vietnam veterans who attended to get the award. However, people claimed that Biden placed the medal backward and didn’t even pay attention.

Oh my gosh, he did. Biden put his medal on backward. He's declining before our eyes. pic.twitter.com/3EnLSiS3PT


However our team did a little research nd this video is fake, below you can view the moment when Joe placed the medal correctly:

I can 100% see Biden doing this backward thing, but it’s time to delete these videos – there is no way it is backward even to be honest he got lucky.
Sometimes we have to wonder why people do things like this?

Biden is on the obvious decline and making fake moments could only help the un-fit President to keep his seat!