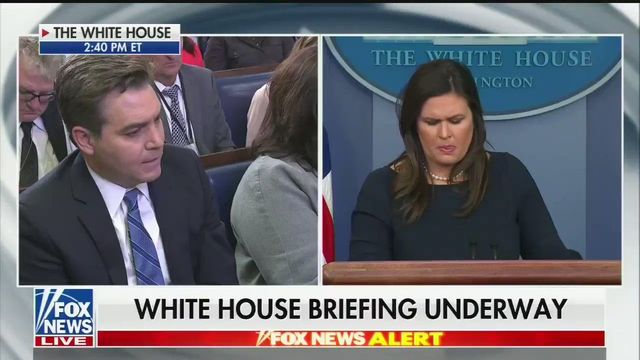 Democrats have no shame. The mainstream media will do everything they can in an effort to undermine our President’s reputation among the American people. Especially CNN.

CNN’s Jim Acosta continues proving just how unqualified he is for adulthood.

According to Jim Acosta, President Trump condemning anti-Jewish sentiment so forcefully was “beneath everybody” and asked Sanders if Trump would tone it down.

“Isn’t that kind of rhetoric just sort of beneath everybody?” Acosta asked Sanders, according to Fox News. “Do you think that the president has thought, at all, going into the 2020 campaign that the rhetoric just needs to be lowered? Whether it’s talking about Democrats, the media, immigrants, or should we just plan on hearing the president use the same kind of language that we heard in 2016 and all through the first couple years of this administration?”

Sarah Huckabee Sanders said that the only shame in this scenario belongs to the Democrats for failing to condemn Ilhan Omar’s anti-Semitism.

“Democrats have had a number of opportunities to condemn specific comments and have refused to do that,” Sanders said. “I think that is a great shame. The president has been clear on what his position is, certainly what his support is for the people and the community of Israel.”

He went one step further by attacking President Trump and that he supports Nazis:
“Essentially suggesting that there were very fine people in the Nazis,” Acosta said.
“That’s not at all what the president was stating,” Sanders replied. “The president has been incredibly clear inconsistently and repeatedly condemning hatred, bigotry, and racism in all of its forms, whether it’s in America or anywhere else. To say otherwise is simply untrue.”

Acosta then suggests Trump thinks “there are very fine people” who are Nazis.

Sanders wasn’t having it. pic.twitter.com/7EpuF1wOHV

I don’t recall the President saying, “There are very fine people on both sides.” after the Charlottesville riot. I do recall him saying that there was a lot of bad behavior on both sides. So Jim is lying again.

Luckily we have Sarah to teach him a lesson!