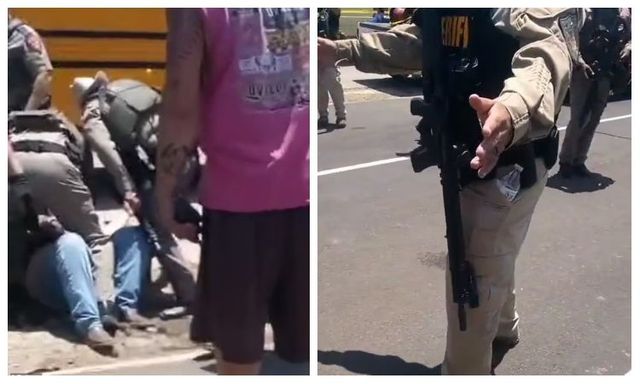 Unconscionable tragedy struck the once-quiet community of Uvalde, Texas, on Tuesday morning. Situated eighty miles west of San Antonio and just over fifty miles from the U.S.-Mexico border, Uvalde was a place hardly known to anyone outside the tiny Texas vicinity before yesterday.

However, in the span of a few minutes, the name has become synonymous with so many other fateful towns like Columbine and Sandy Hook.

Videos that surface this morning show angry parents that are begging the police to react and if they don’t do anything they wanted to let the parents react.

Frantic parents of the children murdered in their Texas school screamed at law enforcement officers to enter the school and discussed storming the building to rescue their kids, harrowing footage shows, as it emerged that the gunman was only stopped when authorities obtained a key to open the classroom door.

New footage shows the chaotic crowd outside the school, as heavily-armed sheriffs and law enforcement stand guard and hold them back – in one case, seemingly wrestling a panic-stricken woman to the ground and pinning her down.

‘What are you doing? Get inside the building!’ one person can be heard screaming.

While the TX shooter murdered children and teachers for an hour, heavily armed police stood outside.

Not only did they refuse to stop the shooter, they stopped parents from trying to do so themselves, even pinning a man down to stop him.pic.twitter.com/2sqCCsmWVd

There are many controversies that surround this video let’s start with the time frame of the video.

It seems that the video was taken at the same time as the children were massacred inside.

It looks like the video was pulled from a much longer Facebook stream. I'm not sure if the timestamp is for the start or end of the video but 11:54 a.m. central? https://t.co/rTLdNfB4xc

The full video is over 6 minutes long:

So what did we learn from these videos?

The police reacted late that’s for sure they should have entered sooner and probably many kids would have been saved.

At least one additional kid died directly because the cops were incompetent.

“When the cops came, the cop said: 'Yell if you need help!' And one of the persons in my class said 'help.' The [shooter] overheard and he came in and shot her," the boy said. https://t.co/T89PC9ljcH pic.twitter.com/YMwah3X7ar


Should the parents enter the school in this kind of situation?

The police had no idea how many shooters there were inside or if there were explosives. Letting parents in, or charging inside without proper equipment is just a great way to ensure that lots more people could’ve been killed. It’s so easy to judge them with the gift of hindsight.

Department of Public Safety Director Steve McCraw told reporters that 40 minutes to an hour elapsed from when Salvador Ramos, 18, opened fire on the school security officer to when the tactical team shot him, though a department spokesman said later that they could not give a solid estimate of how long the gunman was in the school or when he was killed.