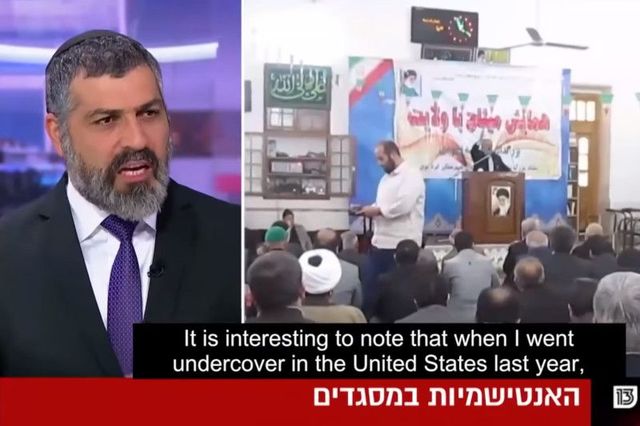 The video is produced by Zvi Yehzkeli, a commentator on issues of anti-Semitism in the Arab world.

“This is based on reports from the organization, “MEMRI” [Middle East Media Research Institute], which over the course of a year-and-half followed a hundred Imams. It is interesting to note that when I went undercover in the United States last year, conversation about Jihad was the most extreme ideas being spread in the mosques,” says Yehzkeli as he introduces the video report.

Yehzkeli continues, “Today, I think more and more Imams in the mosques speak about the Jews, saying they control the economy, or that they need to kill them. Exactly what happened in France 15 years ago is happening in the United States.”

“Here is the report. It’s a wide-ranging project covering many mosques where rhetoric has migrated from the Middle East to Europe. To Europe and the United States.”

The video begins in Texas in what appears to be a mosque, with an Imam proclaiming “The day of judgement will not arrive until the Muslims will fight the Jews. And will kill them!”

Next, the video shows someone speaking at a congregation in Pennsylvania, who is claiming “Even if you look deep behind the scenes, Jews are running everything.”

The video then goes to Illinois where Joseph Farrakhan is inciting hate against the Ashkenazi Jews claiming, “The Ashkenazi he has no connection at all to the Holy Land.”

Then we see an Imam in Michigan claiming “The pro-Israeli lobby has been using the United States as a cash cow.”

The video continues, “Listen for a second to the voice. Is it familiar to you? Where do we here this kind of talk in mosques? Was it in Saudi, in Gaza, in Turkey or in Iran?”

The video then shows a congregation of people chanting “Death to Israel! Death to Isreal!”

The video’s commentator then says, “Correct, it was there, only now it’s happening in the United States. Under the protection of Freedom of Speech, anti-Semitic sermons are spoken in mosques around the country, clearly calling to hurt the Jews. It is something that Americans still have yet to grasp, that this is happening next to the beautiful countryside and shining shopping malls of America.”

The video goes on to show more examples and points out that these Imam’s speeches are put up on YouTube by the mosques for everyone to see, but mostly go unnoticed because much of it is in Arabic and our government has no will to pay any attention to it and ignores it.