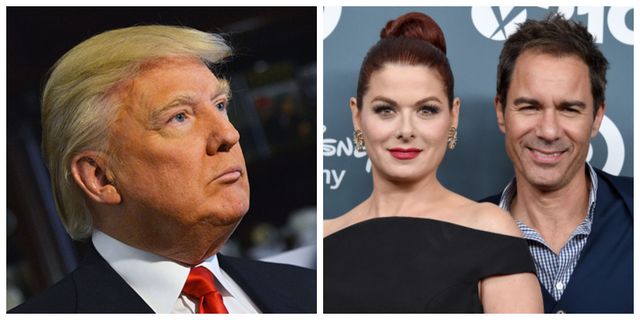 Actress Debra Messing appears to have endorsed an Alabama church’s message that black supporters of President Trump are mentally ill.

The “Will & Grace” star responded “THANK YOU #Alabama” Saturday to a tweet about a Baptist church in Birmingham that displayed a sign reading: “A black vote for Trump is mental illness.”

The tweet came after Messing, a vocal critic of President Trump, joined her “Will & Grace” co-star, Eric McCormack, in an apparent attempt to shame the president’s supporters.

Both Messing and McCormack requested that The Hollywood Reporter a list of attendees at a planned fundraiser benefiting Trump next month.

Trump on Sunday seemingly responded to Messing’s posts as he tweeted that Debra Messing, best known for her performance in the long-running comedy series Will and Grace, had once “profusely thanked me, even calling me Sir” but  “how times have changed”.

Mr Trump responded on Sunday morning, tweeting: “I have not forgotten that when it was announced that I was going to do The Apprentice, and when it then became a big hit, helping NBC’s failed lineup greatly, @DebraMessing came up to me at an Upfront & profusely thanked me, even calling me “Sir.” How times have changed!”

All of them forgot who Trump really is.

Hollywood celebrities are losing a lot of fans with their behavior.