Home Opinion Video: BLM Harass A Disabled Woman And Jump On Her Car While... 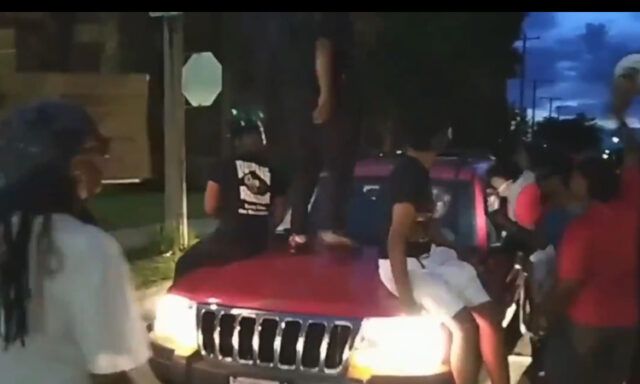 Black Lives Matter protesters in Racine Wisconsin bullying an elderly disabled motorist, and disrupting the traffic during last night’s demonstration were caught on video which also shows no police presence as the chaos unfolds.

The woman in the video that was sent to us this evening is desperately trying to call help!

Of course, the sender confirmed that he sent this video to every major news outlet but everyone ignored the fact that BLM harras a disabled person.

Most Americans, whether Republicans or Democrats, don’t want violence.

And when it comes to these organizations, including Black Lives Matter, Antifa, and the newer splinter groups that mimic their tactics, the media often seems to take their social-justice posturing at face value.

In the current media environment, left-of-center actors who claim to represent the cause of the oppressed are granted more moral license to use violence as a political tool.

This is what we can expect in Biden’s America!

Socialist and anarchist groups have created a growing online structure that serves to support violence, especially against law enforcement, the authors conclude.

Their data indicate that “the appearance of posts with anti-police outrage and/or memes and coded language increased over 1,000% on Twitter and 300% on Reddit in recent months during social justice protests.”

In Seattle, groups with a radicalized collectivist agenda even managed to carve out a de facto autonomous zone for several weeks, before it collapsed into chaos and violent crime.

COVID Vaccine Advocate Post Proof Of Her 13-Year-Old Nephew Vaccination Who Died Three Days Later From Heart Failure – He Had No Known Health...

Godfather of Color Revolutions: Is George Soros the Most Dangerous Man Alive?

Godfather of Color Revolutions: Is George Soros the Most Dangerous Man Alive?

Video: Man Steals 82-Year-Old Man’s Cane Inside A Corner Store Assaults Him In...

Video: Christopher Sign Speaking On Fox News About The Death Threats He Received After...

Godfather of Color Revolutions: Is George Soros the Most Dangerous Man...