Home Culture Video: The Male Steward Who Forced A Family Out Of The Plane... 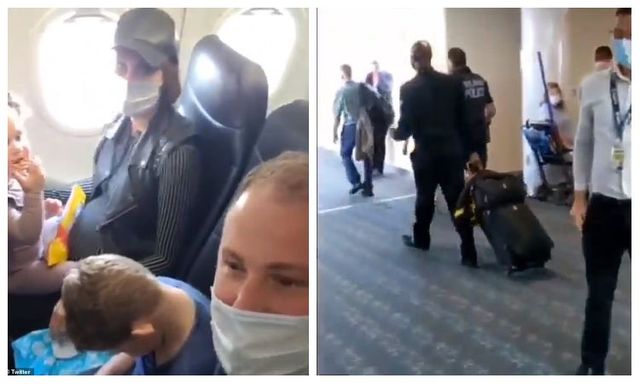 Spirit Airlines has deplaned an entire flight from Orlando, Florida to New York on Monday. According to reports, the reason was that a 2-year-old girl was not wearing a face mask.

The child was part of an Orthodox Jewish family that included a father, a mother and a boy with special needs.

“Seven months pregnant with a special needs kid… who has seizures,” the mother was seen saying in a video clip.

The toddler was eating yogurt on her mother’s lap when a flight attendant instructed the family to exit the plane,

Other travelers sitting near the family defended them, but the flight attendant would not back down.

The mother, who is 7 months pregnant, told the flight attendant that her child just turned two one month ago.

The flight attendant addressed the family on behalf of the male steward who didn’t want them on the plane.

‘I’m sorry. They want you off,’ the flight attendant tells the family, adding that they were ‘noncompliant with the masks’.

The flight attendant says ‘it’s not my choice’ as the girl’s dad argues that they also have their ‘special needs’ son with them. The steward then walks away and says she’s going to call the police onboard.

Family were thrown off a Spirit Airlines flight from Orlando to Atlantic City, just because their barely 2 year old daughter was eating without a mask on. pic.twitter.com/eUStZOIAVr

Two other clips show the family getting out of their seats along with other passengers after everyone was told they needed to disembark the plane.
The family and all of the passengers were let back onto the plane a short time later.

‘Happy ending! We’re back on,’ the girl’s father says in another video.
Video below:

UPDATE: Family is back on plane, heading home. pic.twitter.com/JnLHJ67Jxs

After all of the passengers were back at the gate, police officers were seen in another clip escorting the male steward, who had a problem with the girl not wearing a mask, off the plane.

The family and the entire flight have been allowed back on the plane – except for the flight attendant, who caused the whole scene, seen being led away by Police. pic.twitter.com/stB0PZzDC3

This isn’t the first time an incident like this happened on Spirit Airlines.

A few weeks ago a family was kicked off of a Spirit Airlines flight because their four-year-old autistic son wouldn’t wear a mask, despite a note from a doctor.