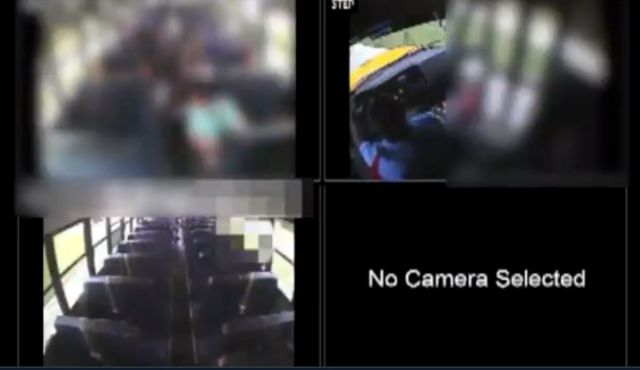 How can the Liberal Left get away with such displays of hatred and anger, yet spew love for everyone? Their double-edged sword is going to cut them and make them wish they had more tolerance for people who do not agree with them.

Yesterday we had another incident that wasn’t reported by the MSM.

Martin County Surveillance video on a Martin County school bus shows a bus aide yelling at a student to take off a “Make America Great Again” cap, then grabbing it off of his head.

“We all have a first amendment right.” 14 y/o Gunnar wore his DonaldTrump hat to school. Bus aide removed Gunnar’s hat without his permission. The aide could now face petit theft charges.

“Boy, if you don’t that hat off this bus… take it off,” an unidentified bus aide said, according to surveillance video.

“I was really confused, I was like ‘I can’t wear this?’ “Johansson said. “She, like, threatened me with a referral and threatened to turn the bus around. I said ‘write me up, I didn’t do anything wrong’, and then she yanked my hat off. It was crazy.”

LISTEN TO THIS: A Martin County school bus aide is under investigation for yelling at a student then grabbing his #Trump #MAGA hat off of his head for ‘hat day’ at school. The school does not have clear policies against wearing political attire. @WPTV pic.twitter.com/NjxvgZKY3W

That kid has a right to wear that hat. He isn’t harming anybody. The bus driver just acted in a snowflake manner
It doesn’t matter what school policy is, this is assault pure and simple. Time to prosecute.

The school district has not confirmed the status of the aide, but Johansson said she has not been on the school bus since the incident.