President Trump revoked CNN’s Jim Acosta’s White House media credentials because of Acosta’s improper, rude lecture he attempted to give the President during a press conference. Instead of Acosta asking a question, he attempts to lecture the President. Acosta is there to ask questions and note the responses, he is not there grandstand and give his opinions. Nobody cares what Acosta thinks, especially the President. When Acosta kept on pushing his opinions at the President, a White House intern attempted to take the microphone away from him to move things along, but he resisted her and hit her on the arm.

Of course CNN and and the liberal hoard rushed to Acosta’s defense, and claimed Trump’s hostility towards the media is unprecedented, although these same liberals loved it when Obama showed disrespect to journalists they disagreed with.

There were several times Obama and others in his administration bounced journalists from press conferences.

Let’s take a look at the evidence of what Obama did.

Here is a headline from 2008 when Obama excluded 3 reporters from conservative publications. 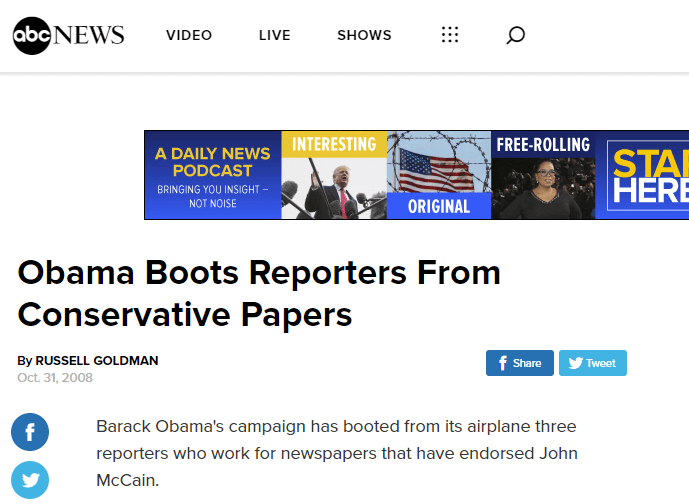 Not long after taking office, the Secret Service literally dragged away a black female reporter.  They took away Brenda Lee, a writer for the Georgia Informer, by her hands and feet.

Can you imagine outrage if an African-American woman were dragged away by Trump’s Secret Service?

President Trump revoked CNN's Jim Acosta's White House media credentials because of Acosta's improper, rude lecture he attempted to give the President during a press conference. Instead of Acosta asking a question, he attempts to lecture the President. Acosta is there to ask questions and note the r

In 2009, former White House Press Secretary Josh Earnest bragged about how well the Obama administration excluded Fox News from significant interviews. Trump may call the press out for their agenda to smear him and putting out fake news, but he does not attempt to exclude anyone behind their back.

What is worse, quietly suppressing the media behind their backs or confronting them head on?

Here’s @joshearnest in 2009 bragging about how well the Admin had demonstrated their ability and willingness to exclude @FoxNews from significant interviews to the Assistant Secretary of public Affairs #KaitlanCollins https://t.co/o98xlRMJuP pic.twitter.com/NUidMFtfO4

In 2015 Obama bounced a reporter for interrupting him “in my house,” while reporters cheered him on. The transgender reporter was shouting “no more deportations” because of Obama’s deportation policies that liberals pretend never existed before Trump took office.

Can you imagine the hysterical liberal outrage if Trump ejected a transgender reporter for protesting deportations?

Check out the video:

President Trump revoked CNN's Jim Acosta's White House media credentials because of Acosta's improper, rude lecture he attempted to give the President during a press conference. Instead of Acosta asking a question, he attempts to lecture the President. Acosta is there to ask questions and note the r

Later that year, the Washington Free Beacon’s Adam Kredo was booted from a media briefing with Obama’s State Department, even though he didn’t utter a word. They just didn’t want him there.

2015 Washington Free Beacon’s Adam Kredo ejected from a State Department media briefing in Vienna and senior department officials threatened to call security on him, without him even saying a word. Had to control that #IranDeal narriative #KaitlanCollins https://t.co/1TP3XjjBPA pic.twitter.com/60Ie76VIU6

The media covered those incidents much differently than they now cover Trump for simply disagree with reporters and telling them what he things of them and their organizations.

Here’s a sampling of the headlines after Obama ejected that reporter in 2015:

Unsurprisingly, there was no commentary about Obama waging war on the press.

CNN’s Wolf Blitzer showered praise on Obama for how well he handled the situation.

When Obama had a journalist removed for heckling @wolfblitzer on @CNN called it an ugly incident that the President handled well🤣#AttackOnMedia #LastWord@realDonaldTrump #KaitlanCollins pic.twitter.com/l0gakNDGZ7

Now let’s fast forward to the Trump administration and see how CNN replied when it was one of their reporters who is told to stifle himself (but wasn’t immediately kicked out.):

.@CNN has released a statement in defense of @Acosta, saying “this President’s ongoing attacks on the press have gone too far.” https://t.co/FDMKhPap7c pic.twitter.com/ic1yAUxmIc

Yes, Trump criticizes the press, but he hasn’t taken actions to obstruct them. The same cannot be said about Obama. Obama’s Justice Department subpoenaed the telephone records of Associated Press journalists and surveilled Fox News reporter James Rosen, naming him as a co-conspirator in a leak about North Korea’s nuclear program. A similarly named journalist, the New York Times’ James Risin, was targeted by the Obama administration and forced to testify to reveal a confidential source.

Trump may voice his unpleasant opinions about the press, but Obama was objectively the most anti-press President in modern history. A historic 77% of Freedom of Information Act requests were denied by his administration (more than any other President), and Obama set another record in prosecuting more journalists under the Espionage Act than any other President.

Obama relentlessly attacked press freedom and reporters more than any other President in American history. There is no comparison between what Obama did to the press and what President Trump has done up until now.

Do you think Obama was the most horrible POTUS in history? Scroll down to leave a comment below.

NFL Says They Have “Moved On” After Colin Kaepernick’s No-Show For...